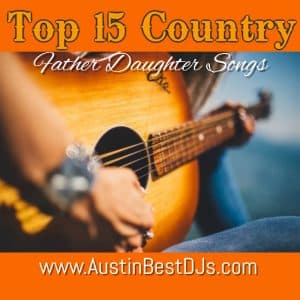 When it comes to the father daughter dance, there are thousands of songs to choose from. If you narrow it down a bit, to just country father daughter songs, it’s a little easier, but not much. haha

There are so many great songs to choose from. So many, in fact, it took us much longer than usual just to narrow down the list to the top 15! By the way, we included links to every song’s lyric video, so you can read the lyrics to each song if you’d like to. So let’s get to the lists, now.

15. You Are My Sunshine – by Johnny Cash. This is a great, classic Country song that is highly underrated. Check it out and see if you like it. We love it!

14. He Didn’t Have to Be – by Brad Paisley. This song is a beautiful song written about a Stepdad and his role in his stepdaughter’s life. If you’re looking for a song about stepdads, this is the perfect song.

12. Brown Eyed Girl – by Van Morrison. So this song isn’t often thought of as Country, but we had to include it, since it’s a very popular father daughter dance song, and it’s one of the most-requested!

9. There Goes My Life – by Kenny Chesney

8. Daddy Dance With Me – by Krystal Keith

6. How Sweet it is – by James Taylor. This is a classic song that has remained a favorite for years. Be sure to check out Marvin Gaye’s version, too. This is very different and has the classic R&B vibe. 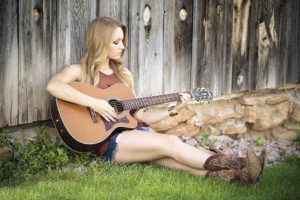 5. It Won’t Be Like This for Long – by Darius Rucker

4. Butterfly Kisses – by Bob Carlisle. This isn’t often thought of as a Country song, either, but we had to include it, since it’s still one of the most requested parent dance songs for weddings.

2. I Loved Her First – by Heartland. This song is the second most-requested song of the country father daughter songs, and rightfully so. Check out the lyrics!

Finally, we’re at number one. You know this song had to be number 1. It’s the perfect country father daughter song!

This song literally goes through life stages in this song and sums up the special father daughter relationship perfectly! We included the lyric video, below, so you can read the lyrics and decide if this song works for you.

We hope this article has helped you narrow down your country father daughter songs list for your wedding. If you still can’t decide, you can even ask your DJ to create a custom mix of a few of these songs, for your father/daughter dance.

It was tough to narrown down the song list to just 15 country father daughter songs. Feel free to do more research, if you didn’t find the perfect song for you and your father. If you’re looking for other great songs, check out our Country wedding songs article, as well as our Top TX Country Songs for Weddings article!

Feel free to visit our YouTube channel for more great wedding song lists, or contact us via email, call, or text. We’ll be happy to answer any questions you have!