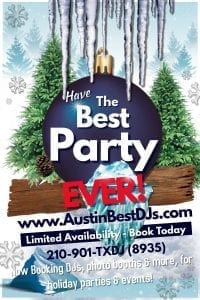 So we’re updating this article since it’s been a bit since we wrote the original article. If you’re on your company’s holiday party planning committee, it’s REALLY time to book your holiday party DJ, photobooth, Karaoke, games, or whatever other entertainment you’re considering for your Austin or central Texas holiday party!

People usually start booking their holiday party DJ, photobooth, band, or other entertainment around early September. Once Labor Day passes, it’s like the holiday party brain turns on! We get flooded with calls, emails, and messages, about booking us! We’re always happy to help if we’re open.

Remember, there are only a few weekends to have your holiday party, until Christmas, if you’re doing it in December. We actually book a lot of late November holiday parties, too.  This is smart and can save you some money!

It’s already late November, and time is running out! We have just one week left until December. Wow, this year sure flew by! 🙂 Currently, our first two weekends of December are very busy! At this point, we have a few DJs open for the first Friday in December, but our photo booths are all booked up!

For the second weekend in December, we have a few DJs open, and we still have one photo booth open for 12/14/19. On the third weekend, we do have both DJs and photo booths available. You could always wait until after the holidays. 🙂 Read more, below.

Book Your Holiday Party DJ After the Holidays!

You don’t have to book your holiday party before the holidays. We’ve even done holiday parties in mid to late January! Judging by the pictures and attire, you would have never known it was after the holidays! Everyone wore similar attire, there were Christmas decorations, and we even added “holiday party 2019” (and 2018), on the photo booth strips! Clever! We’ve also booked a January 2020 date for another company holiday party, too!

Perhaps these companies wanted to have a holiday party that celebrates Christmas and Chinese New Year, in between both, but we’re not 100% sure. One thing we are sure of is that they saved a TON of money, waiting until after the holiday rush and they didn’t have to compete with others, for a Saturday spot!

The “off-season” is in January, so they likely saved lots of money on the venue and perhaps on their vendor fees, too! It’s a pretty smart move and it allows you to get more for your budget! We’re not trying to persuade you by any means, but we just wanted to let you know that this could certainly be an option. 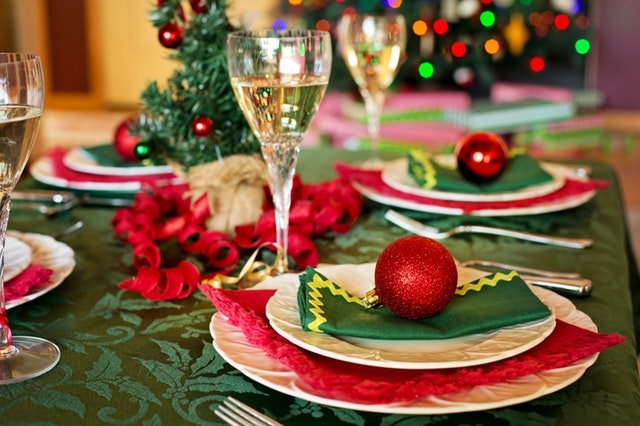 Regarding entertainment, we have a variety of great holiday party DJs, awesome photo booth rentals, lawn and giant game rentals (giant Jenga, giant Connect 4, cornhole, and other games), Karaoke DJs, and more! Whether you’re entertaining 10 employees or 10,000 employees, we will work hard with you, to ensure you and your fellow employees will have a great time!

Be sure to read our “Why You Should Plan Your Holiday Party ASAP” article. It’s not meant to scare you, but to help you understand the advantages of booking early! 🙂 Contact Jason or Diana, today, and let’s celebrate, together!

How Much do New Year’s Eve DJs & Photo Booths cost?