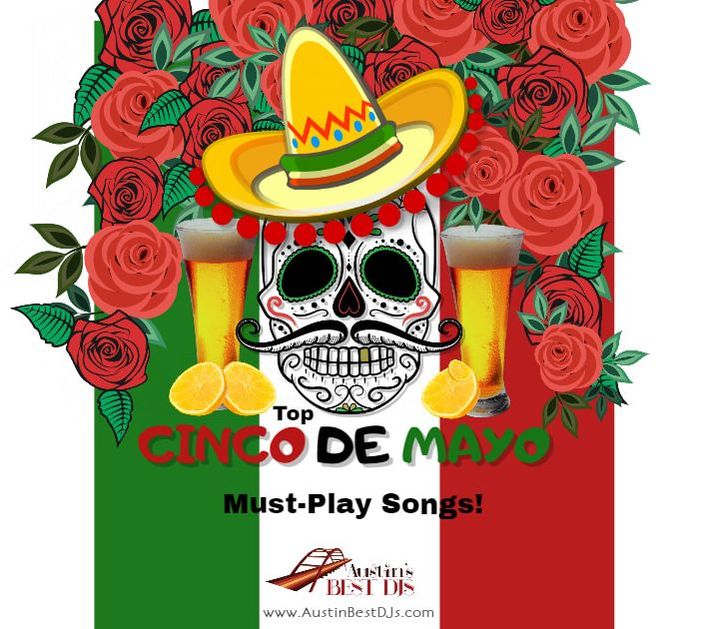 Looking for awesome Cinco de Mayo songs? We’ve got the perfect playlist for you. Although we should note that these songs are great to play any time of year, even if it’s not Cinco de Mayo! 🙂

I know it’s hard to believe, but May is already here! That means Cinco de Mayo festivities will be going on all weekend! Cinco de Mayo has become a pretty big celebration, especially with social media, in the last few years! If you’re having a Cinco fiesta, you’ll definitely need some great music!

You just can’t have a great party, without great music! With that being said, we wanted to give you some great Cinco de Mayo songs & ideas, to liven up your Cinco Celebration!

Keep in mind, we often get booked for public events, where there are lots of people in attendance. We play music for the masses, so these song choices are great songs that most people will know and recognize. We’re not playing truly authentic Mexican or Spanish music that only Spanish-speaking people will know.

We also are not playing Cinco de Mayo songs that only people who listen to Latin or Spanish genres will know. However, if the client asks us to play traditional songs, of course, we can also do this (though we’ll add a few classic ones that they will know).

We always try to play fun, upbeat Cinco de Mayo songs that people have heard and songs that will get them dancing! Here are a few great songs to add to your fiesta playlist! We wanted to number them, but then people may think we put them in order and they’d argue which should have been first, etc. 🙂 If you aren’t familiar with the song, simply click on it, to listen to it.

If you’re looking for more modern hits, be sure to include songs from Bad Bunny, Ozuna, and Maluma. Bad Bunny has become very popular, especially with the under 25 crowd.

We hope this list helps you have a great Cinco de Mayo celebration. These Cinco de Mayo songs are great for any time, all year! If you’re looking for more great party songs, read our Top Wedding & Party Songs article for lots of great song ideas!

Jason has a Master's of Education (MEd), and a Master's of Public Affairs (MPAff). and has been in the DJ field for over 2 decades as a DJ, nightclub owner, radio show DJ/host, bar/club DJ, concert & festival organizer/promoter, and is the co-founder and owner of Austin's Best DJs & Photo Booths, and Radio DJ Drops. Jason is also a certified wedding/event planner and has written articles/been featured in The NY Times, Brides, Style Me Pretty, Bustle, Disc Jockey News, DJ Times, DJNTV, The DJ Insider, Mobile Beat, My Wedding Songs, Fox Business News, NBC, ABC, Telemundo, and Wedding Planner Magazine. He currently writes all of the wedding/event planning tips and blogs to help everyone plan their event, successfully!